OK… this tip borders on pure magic, and I had never heard of it before. The spike function in Word allows you to cut multiple sections in a Word document, and then paste them together in a single function. No more “cut, then paste, then cut, then paste, etc…”

In my example, I have the following Word document with this paragraph. I want to move all the lines that say they should be moved to the end of the document:

First, I highlight the first sentence and hit Ctrl+F3 (apparently on a Mac it’s Command+F3):

You’ll see that the select sentence is gone. I’ll do the same thing for my second and third sentence… highlight the words and hit Ctrl+F3 again:

Now that I have the three lines copied, I can go down to the end of my document and type the word spike:

When I hit enter, all the copied lines show up in a single paste operation! 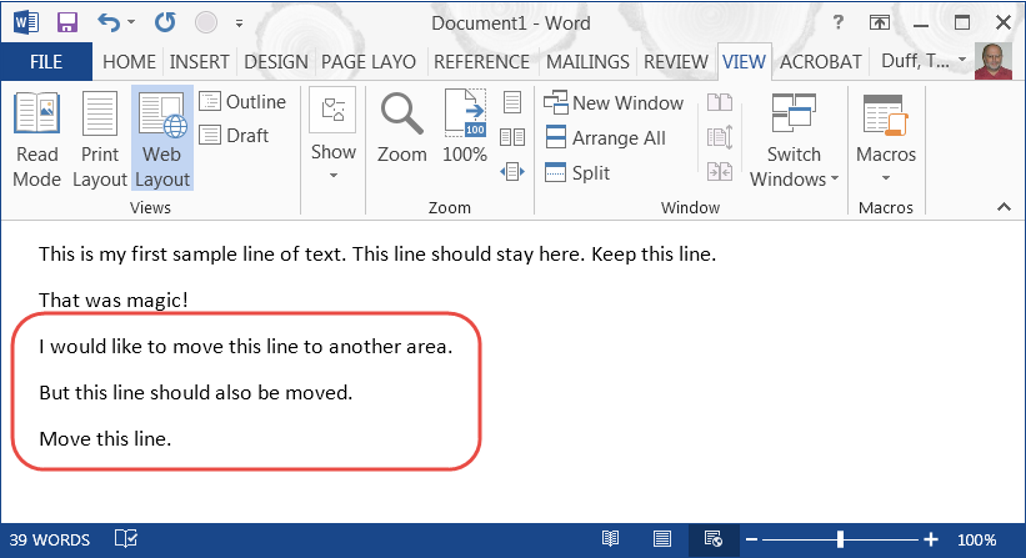 A nice benefit of spike is that you can continue to type the word spike, and the same content will be pasted again. If you want to clear out your holding area after pasting, use Ctrl+Shift+F3 instead of spike (Command+Shift+F3 for Macs). That will paste the information but will not retain it for future pasting.

With as many years as I’ve used Word, I’m surprised I’ve never ever heard of spike. I’m guessing you might be as surprised as I am.

View all posts by oneminuteofficemagic

This is a text widget, which allows you to add text or HTML to your sidebar. You can use them to display text, links, images, HTML, or a combination of these. Edit them in the Widget section of the Customizer.
Loading Comments...
%d bloggers like this: